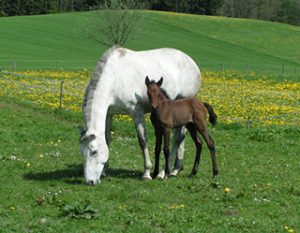 The Evelino riding facility, the successor to the “El Tesorillo” stud farm in Arcos de la Frontera (Andalusia), was opened in October 1992. 4 stock mares and 2 licensed stallions moved into the stables. A third stallion was added in 1994 and together they formed the foundation of the breed. Mares as well as stallions from the stock of the Andalusian stud farm, descended from old, noble Portuguese bloodlines of traditional Portuguese studs.

Sonorous names in the parentage papers such as Andrade, Veiga, Palha, Infante Camara and Raposo Cordeiro are a guarantee for connoisseurs for top-class Lusitanos, versatile, talented, full of character and timelessly beautiful.

A small but fine breed in quality instead of quantity should grow and resist changes in fashion in order to preserve the original breed type in all its facets as a valuable cultural asset.

Outdoor riding arena 300x269 Embedded in the wooded hills of the scenic Linzgau and in the immediate vicinity of the three-country corner of Lake Constance, the riding facility is not far from Salem Castle and the city of Überlingen.

The stud's infrastructure includes a stable with mostly spacious outdoor boxes, a saddle room and a washing area. A 15 x 30m large, light riding hall with irrigation system and spectator stand is directly connected to it and enables training and teaching regardless of the weather. A perfectly drained outdoor riding arena of 15 x 30 m is available and the extensive 10 hectare paddocks between wooded hills and the Ach valley offer protected pastures.

Stations of my equestrian training:

Growing up with horses and equestrian sports, I specialized in Iberian horses and received intensive training from the Portuguese riding master NUNO OLIVEIRA on regular trips to Spain and Portugal.

In the middle of the 80s I started my work as a riding instructor for the youngest son of the Andalusian breeding family RODRIGUEZ, in Arcos de la Frontera. During my time there I managed the Lusitano stud farm "El Tesorillo", the sale of his horses and a riding school I set up with an international clientele. Trained in 4 languages, I taught riding students from all over Europe and the USA.

Manolo Rodriguez Gonzalez, the youngest member of the breeding family and my first Spanish student, became a rider at the Royal Riding School in Jerez. Today he is himself a renowned trainer for horses in southern Spain. 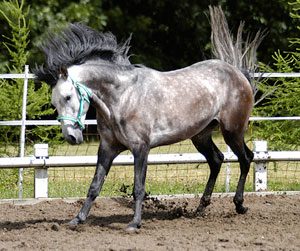 Working with Iberian horses at that time included breaking in and further training up to the point of sale. Lessons up to the HIGH SCHOOL as well as basic and development work in the lessons of the DOMA VAQUERA shaped the training of the horses entrusted to me. The classic training scale, with the variant of putting relaxedness before the beat of the training goal, created the basis for later specialization. The training of the horses had Iberian accents, such as early playful encouragement by working on the hand, breaking in and the traditional influence of the old French schools of equestrian art. My business partner and fatherly friend MANOLO RODRIGUEZ SANCHEZ was also at my side as a promotional trainer at DOMA VAQUERA. He was the man of the "first hour" when the Doma Vaquera was raised to a recognized, regulated equestrian discipline. From a work riding style, tournament sport and Manolo Rodriguez became a respected judge. His name became synonymous with first-class horses in terms of category and training.

Well-known bullfighters on horseback recruited their horses from his stock, including well-known greats such as Javier Buendia, Manolo Vidrie and the famous Alvaro Domecq. With him, OPUS 72 became a living legend! On the self-bred Lusitano mare ENAMORADA, Manolo Rodriguez Gonzalez won the European Championship 2000 as one of the best Doma Vaquera riders in the country.

I met my husband Jose while we were working together at the EL TESORILLO stud. A farmer by profession, his passion for horses and his innate “horse mind” made him decide to devote himself entirely to the subject of horses. At that time we became a well-rehearsed team, Jose specialized in running-in and together we trained the young horses on the hand, under the saddle and on the long reins.

In 1995 and 1997, three years after the opening of Gestüt Evelino on Lake Constance, our two daughters Marie-Luisa and Marietta were born.

The story goes on……. 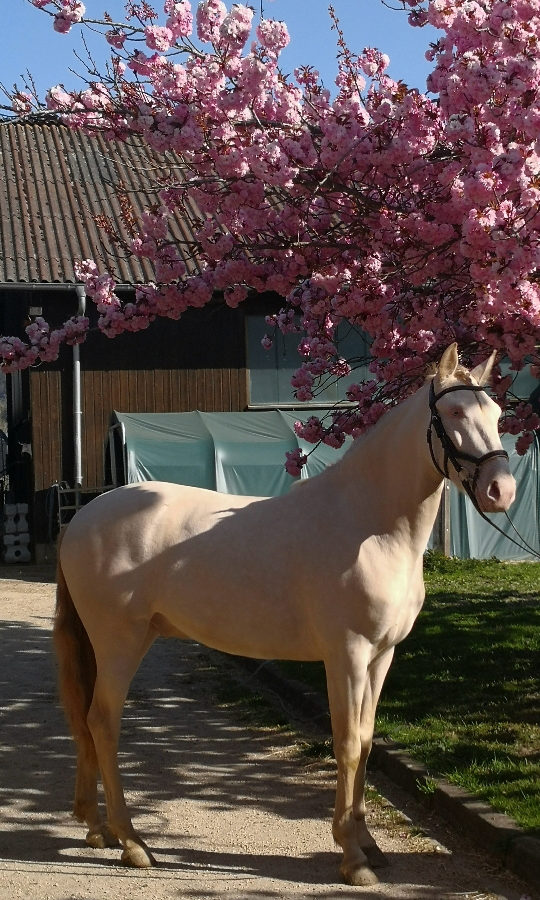 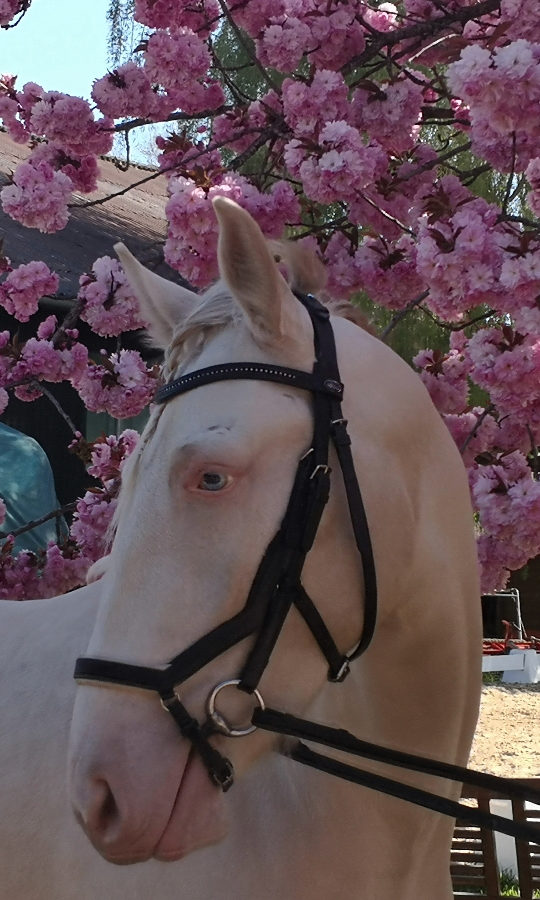 We offer holidays with our Lusitanos or your horse at Evelino stud. Combine the best time of the year with the unique opportunity to get to know this fascinating Iberian horse breed in attractive riding programs.

You will find joy and a sense of achievement in individual training for rider and horse. First-class, stud-owned school horses. Practical exercises for more successful riding, training and teaching. Motivation and knowledge.

The Lake Constance holiday region awaits guests with a wide range of leisure activities. However you define relaxation, here you will find it: